There’s a new player in the internet game, and it’s called Li-Fi.

Li-Fi is a new LED-based communications technology that delivers a high-speed mobile communication in a similar way to current Wi-Fi, but it uses light rather than radio waves to send signals and data, according to information from pureLiFi, a new company working to develop the technology. Li-Fi it can communicate signals about 100 times faster than Wi-Fi, according to the BBC, with speeds up to about 1 gigabyte per second. 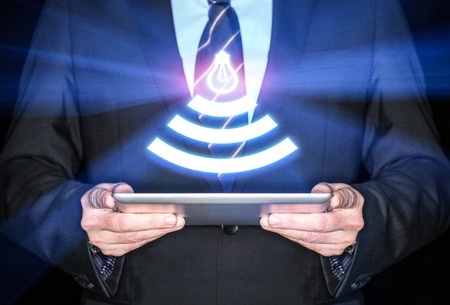 Li-Fi works much like Morse Code: lights flash at speeds that are imperceptible to the naked eye, communicating signals and data around the room to other data points. One of the main benefits of this system is that light cannot pass through walls, so Li-Fi wireless tech is incredibly secure, only transmitting data within a visual range. This could be a game changer when it comes to government networks that rely on security, but could also be a huge benefit to home networks – you won’t have to worry about your neighbor piggy-backing on your internet connection.

This application has been recently real-world tested, and the company that’s responsible for its creation, pureLiFi, is ready to start talking to customers. However, it’s unlikely that this technology will replace Wi-Fi networks completely: while the fact that light cannot travel through walls does give smaller networks the freedom to operate very securely, Li-Fi would be unable to replace bigger networks like hospitals, universities and busy city areas because of its inability to penetrate walls. Plus, Li-Fi can’t be transmitted outdoors because sunlight interferes with the signal.

There is the possibility, though, that Li-Fi could serve as a supplement in some areas on these larger networks to improve speed and usability. Time will tell, but PureLiFi is confident that this will be a $113 billion industry by 2022.

In the meantime, if you’re having trouble with your internet speed and connection and you think it could be your cabling system, Muth Technology can help. With expertise at running data cabling and establishing network connectivity in office and business environments is our specialty. To learn more or to get a quote for your project, contact us today.